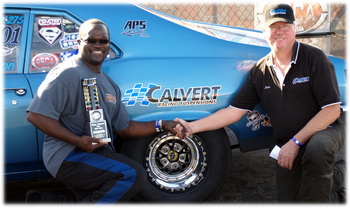 LAS VEGAS 5/8/13 – In drag racing, heat is the great equalizer. When the weather is cool and overcast, the fastest (i.e. well-funded) racer tends to win. But when the track is slimy, greasy, and slick, that’s when the skill of the driver comes into play. No matter the setup, when it’s hot and humid, it takes a real shoe to get to the finish line first.

At the recent MagnaFuel PSCA Nationals at The Strip at Las Vegas Motor Speedway, Pacific Street Car Association veteran Artis Houston, a competitor in the Mickey Thompson Wild Street class, added to what has been an amazing year when he qualified No. 1 and set the class ET and Speed Records (4.952/148.69) on his way to the victory in the heat of the Nevada desert.

Houston was elated to hear the news, especially given the highs and lows of the last couple of seasons. “I am very excited to hear this news, especially considering the up and down journey of success and disappointment over the last few years,” he said. “I want to personally thank John Calvert, Joe Rivera, Ross Pistons, Pettis Performance, BES Racing Heads, Induction Solutions, SCE Gaskets, Dave at MPG, Mark at Hot Rod Performance, TRZ, Gil at SpeedWire, Phil at PMR RaceCars, All the folks at Mickey Thompson Tires, Mike’s Transmissions, Mark Washington, Mark Menscer and Eric Mitchell. Without these individuals pushing me forward and providing the best parts in drag racing, none of this would be possible.”

Houston was also quick to recognize the staff of the PSCA for their efforts in providing drag racers with a safe and competitive series in which to race. “Thank you, PSCA, for giving us a great place to race and I look forward to continued progress and accomplishments.”

PSCA President Mel Roth may not have been as excited about the weekend as Houston, but it was close. “We love seeing guys like Artis break records and have weekends like this,” Roth said. “It may not be me going down the track, but when I see racers reach these milestones in their careers, I’m happy for them and proud of them. Plus, when racers are able to set records in those kind of temperatures, it’s a huge day for both the driver and the fans.”

Contingency sponsors for the 2013 season can be found at PSCARacing.com and at the sanction’s official page on Facebook, Facebook.com/PSCARacing.

Racers and fans can also visit the PSCA’s official page on Facebook to find photos, stories, and videos of the best drag racing in the country!

About the Pacific Street Car Association:
In its 14th season, the Pacific Street Car Association, based in Las Vegas, has been a staple of West Coast drag racing since its inception. With six heads-up classes, four bracket classes, and two index classes, the PSCA provides some of the best racing in the country for both fans and racers. The PSCA season is capped off by its Street Car Super Nationals at The Strip at Las Vegas Motor Speedway, now in its ninth year.