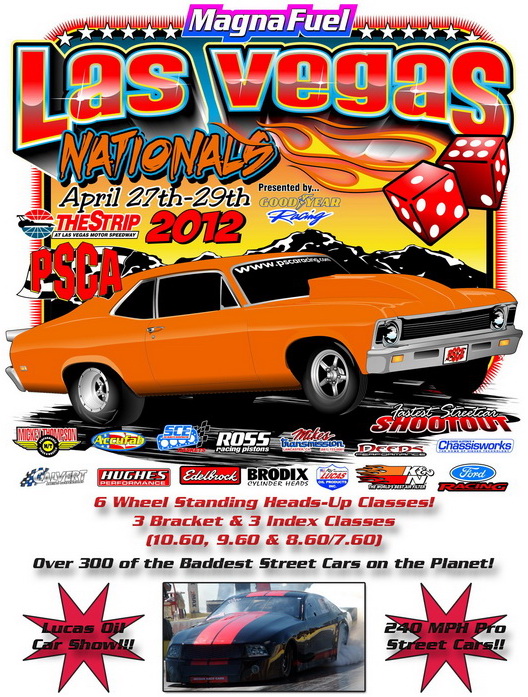 LAS VEGAS — The Pacific Street Car Association announced today the sanction’s Edelbrock World Finals that was rained out Nov. 6, 2011, has been officially canceled and will not be rescheduled. The event was planned to be run March 9-11 this year at Auto Club Dragway in Fontana, Calif., but was canceled due to the track being closed.

With the books now closed on the 2011 PSCA season, the points for last year’s classes will be made official in the coming days. The awards banquet for the 2011 season is scheduled for Saturday, Sept. 8, during that weekend’s race at The Strip at Las Vegas Motor Speedway. More details regarding the banquet will be released in the coming weeks.

PSCA President Mel Roth was reluctant to cancel the event, but according to sanction rules, a rain out date must be made up at the track in which the cancelation occurred and with the unknown status of Auto Club Dragway, he made the decision to move on.

“We never want to have to make this kind of call,” Roth said. “We want to give our racers the opportunity to race as much as possible but we were running out of time to make up the Fontana race. Plus, we want to get our champions crowned. They earned that honor and deserve to be recognized.�

Racers who were registered for the World Finals last year still have an opportunity to profit from that race, however. “Any driver who was registered in Fontana last November, comes to the MagnaFuel Las Vegas Nationals at The Strip April 27-29, and finishes in the money will see their purse doubled,” Roth said. “Hopefully, it’s an additional incentive for the racers and lets them know we’re here to help them as much as we can.”

The next PSCA event, the MagnaFuel Vegas Nationals, is scheduled for April 27-29 at The Strip at Las Vegas Motor Speedway. For information on this and other LVMS events, visit LVMS.com or go to their official page on Facebook at Facebook.com/TheStripAtLVMS.